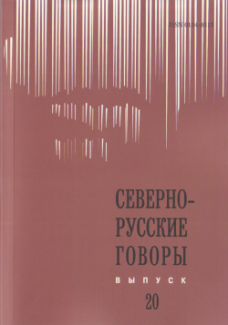 The “Northern Russian Dialects” (NRD) is an academic journal focusing on the problems of dialectology, the inter-ethnic and inter-language contacts in the Russian North, primarily contacts of the Russian language with the minor languages of the peoples of Russia (Karelian, Vepsian, Izhorian, Komi, Sami, etc.). The articles of the journal are distinguished by a wide comparative historical background, attention to the facts of Old Russian regional writing, to the problems of historical geography, onomastics, ethnography, ethnolinguistics. The scientific discussion on the pages of the journal reflects the most pressing problems of linguistics, in particular, the problem of the disappearance and transformation of dialects of the Russian language and minor languages of the peoples of Russia. The most important scientific task implemented by the authors of the journal (philologists, ethnographers, local historians) is to fix, preserve and analyze regional types and forms of speech. The main part of the articles reflects the results of field expeditions, as well as the experience of the authors working on dialect dictionaries.

The content of the publication corresponds to the following groups of scientific specialties: 10.02.00. Linguistics (10.02.01. Russian language; 10.02.02. Languages of the peoples of the Russian Federation (indicating a specific language or language family).